Contest--The Lincoln Lawyer Give Away! 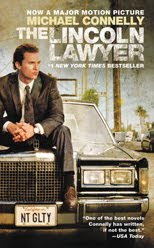 As most of you know, I'm a pretty big fan of Michael Connelly, (If you you've never seen my video interview with Connelly, check it out right HERE)but I'll be the first to admit that Hollywood hasn't always been kind to Connelly, but that's about to change (Hopefully)with director Brad Furman's adaptation of Connelly's first Mickey Haller novel, The Lincoln Lawyer.

So to celebrate the release of the Lincoln Lawyer, Crimefactory along with the good folks at Little, Brown publishing and Lionsgate films are giving away five copies of the Lincoln Lawyer and five posters of the theatrical release.
To enter, just leave a comment with your e-mail address and five entrants will be chosen at random, the deadline to enter is February 10th and the contest is open to all.

Also make sure to check out the Lincoln Lawyer's official website right HERE
and the theatrical trailer below: