The Track of Sand by Andrea Camilleri--reviewed by Jonathan Woods 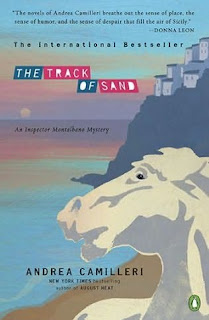 The Track of Sand by Andrea Camilleri,

I’ve been a fan of Andrea Camilleri’s Sicilian crime novels starring “Chief” Inspector Montalbano since the first one appeared in English in about 2002. The Track of Sand, the eleventh in the series masterfully translated by Stephen Sartarelli, does not disappoint. Fast, clever, funny and cynical. Who could ask for more?

Inspector Montalbano awakens to the sound of waves outside his window. After revisiting the fleeting images of a dream involving a woman who turns into a horse and the instructions “Mount me,” Montalbano comes fully awake. Looking out his window he discovers lying on the beach not a dead body but the bludgeoned and bloody carcass of a race horse.

The description of the dead horse and its last minutes alive as surmised by Inspector Montalbano is grotesque and horrifying. Montalbano concludes that four men beat the horse with iron bars, while two others stood by and watched. A nasty business.

Somehow the wanton slaughter of an innocent animal is more disturbing to us than a human corpse. Though we don’t hesitate to chomp down on our New York strip steaks and barbecued pork loins so beautifully displayed in the butcher’s case.

This juxtaposition of sexual innuendo and sudden brutal violence are the yin and yang of existence in Camilleri’s Sicily. Montalbano himself juggles two (or is it three) mistresses while managing to shtup a randy lady equestrian on the side. Montalbano’s dream actually comes true!
When the horse carcass disappears while Montalbano drinks a coffee and then takes a shower back in his house, Montalbano is determined to bring the sadistic killers to justice. Montalbano’s investigation takes him to a private horse race staged by Sicilian elite. Other clues point to involvement of the Mofiosi, whose fingers are inexorably entwined in the rugged hills and valleys and hard towns of Sicily. Here’s the inside scoop on getting by in Sicily:

"Family relations, even those so distant that they would no longer

be considered such in any other part of Italy, were in Sicily,

the only way to obtain information, expedite a bureaucratic procedure,

find the whereabouts of a missing person, land a job for an unemployed

son, pay less taxes, get free tickets to movies, and so many other things

that it was probably safer not to reveal to people who were not family."

The story thunders along with an occasional aside for a quick fuck in a convenient pile of hay or the enjoyment by Montalbano of a sumptuous meal prepared by his housekeeper and star chef:

“He took a shower and went out on the veranda to eat. Adelina

giant prawns to be dressed only with olive oil, lemon, salt, and

Or at a favorite restaurant:

“A few minutes later, there wasn’t any room left on the table for so

much as a needle…Shrimp, jumbo prawns, squid, smoked tuna,

calamari and squidlets tossed in a salad with orange slices and celery,

Camilleri throws plenty of humor into his fast-paced tale, mostly of the slapstick variety. There is an ongoing riff throughout the story about the fact that Montalbano has reached that certain age when he needs to wear glasses. Tres amusant.

Before you know it, you’re turning the last page of The Track of Sand. Evil has been derailed, at least for the time being. And besides for Montalbano it’s time for lunch with a pair of his lady friends. Is he going to try for a ménage a trois? All shall not be revealed.

The Track of Sand is an enjoyable, sometimes cynical and ultimately romantic trip through the dark side of Sicilian life. If I have one complaint, it is that Montalbano is too well adjusted, a guy for whom the glass is always half full. We see darkness in Camilleri’s tale, but we never confront it face on as in one of Derek Raymond’s bleak but wonderful police procedures or in the novels of Italy’s master of noir, Niccolo Ammaniti.

This complaint aside, The Track of Sand is an entertainment to be thoroughly enjoyed in the company of several glasses of whiskey, some sliced prosciutto and a plate of olives.