The Lesson of Blood by Keith Rawson 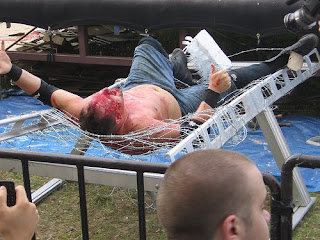 My eyes opened down a dirt track, sitting next to my father in one of his old cars. I can't remember what kind of car it was? Just another rusted out heap in a long line of rusted out heaps.

My father thought he could fix everything with his hands.

-I thought you said....
-I know...I know what I said...but I can't. I can't, not any more.
Blood rushed through him, his skin going hot/cold, beads of sweat popping, coursing down the jagged valleys of hard flesh which peppered his shiny scalp, his cheeks, his neck and chest. The puckered, raised flesh were a life time of labor, like a permanent Employee of the Month photo stapled to his back.
-We need the money.....
-We haven't needed the money in ten years...I can't watch you do this to yourself anymore. What are you trying to prove?

The cracked vinyl bench made my bare legs itch. The front struts squealed under our weight. My family were large people, even at 6 or 7 I weighed 150 lbs. My father was a walking brick wall, my mother the same. Both of them liked to drink. They never seemed drunk to me, just mad. Mad at the little house we lived in, the shitty jobs they always lost six months or a year after they got them, mad at each other for being so fat and knowing no one else would have them.

I think we'd left the house because my mother had lost another job waitressing, or working at the seed factory and she was trashing the house. I know I was scared and my father didn't like to see me scared, so we left, driving until he decided he needed a drink, so we pulled off the road, parking out in the scrub brush and dying saguaros watching the sun dip into the flat desert.
He was raising the short dog of Makers Mark to his lips when the other car slammed into our bumper and throwing us hard into the dash.

-I have NOTHING to prove! I am the GREAT SHIEK! Terror of the SQUARED.....
-You're DELL LANGLEY! DELL LANGLEY, MY HUSBAND! THE FATHER OF MY CHILDREN! YOU ARE NOT THE GREAT FUCKING SHEIK!
He briefly met her eyes, his tiny wife. She seemed so fragile and in need of protection when they met fifteen years ago. But her body was a mirage, a trick of the eyes hiding a fierce predator. It was what he loved most about her, this hidden strength. He shifted his gaze to his feet, squatting away the tears, trying to focus on the curled toes of his familiar boots.
-Dell...If you go out there...if you go out there, you'll never see me again. I can't live with another scar. I can't live with the blood anymore.

It sounds cliche, but in that moment, I felt weightless. For a blink of an eye, my enormous body was a bird. I remember smiling, maybe even laughing when my face collided with the wind shield, my nose splintering, blood splashing down my cheeks, glass tearing into my forehead.
I remember my father yelling something, the rumble of it barely penetrating the white noise that filled my ears. His fists clenching and unclenching, his head turning, staring back at the two shocked teenagers who'd run into us. He said something to me and left the car

His entrance music began and the English interpreter told him it was time.
It was time.
He looked at his beautiful wife one last time as he fitted his turban on top his head, turned, and walked away.

The car that had ran into us was being driven by a boy. That day, I remember him looking so adult--Scared, but grown up. But didn't all people over the age of fourteen look like adults when you were six? The car he'd been driving was brand new. Maybe it belonged to his parents? Maybe it was a gift for a good report card? He had the look of privilege--blond, blue eyed, a deep desert tan face.
A beautiful face.
He had a girl sitting next to him in the passenger seat. I imagine she was beautiful, too, but I couldn't tell because all of the blood.
My father reached the ruined car in four giant steps--he was deceptively quick for a man of his size, a trait I inherited--and put his fist through the driver side window and wrapped his hand around the boy's throat.

He was used to American crowds. Americans with their mania for spectacle and their unquenchable blood lust. The Japanese were a fastidious audience, erupting briefly as he burst through the curtains, marveling at his size, but then growing silent, the only sounds the shuffling of feet, muffled coughs.
He charged the ring, sliding his body under the bottom length of barbwire the promotor had replaced the ring ropes with. The crowd popped again as he turned in a slow circle taking in the weapons strewn across the mat.
The bell rang and the attendants set the ring posts on fire.


My father dragged the boy through the shattered window, glass tore into him, his mouth opened wide, a scream trying to drag out of his lungs. My father didn't give it a chance to escape, driving his fist hard and fast into the boy's teeth before he even hit the ground. Once my father had him in the dirt, he climbed on top of him, peppering his face and upper body. After five minutes, he finally stopped punching, his body heaving. He stared back at me, his face gleaming with sweat. He held up his fist and I watched the blood and chips of bone drip from his knuckles.
I knew then, you could fix anything with your hands.

The Japanese were just like Americans.
Once the fires were lit and he and his opponent began to tear into one another, tossing each other into the fire and barbed metal, they all clamored to their feet, screaming themselves horse, demanding more horror, more blood.
More, more, MORE!
None of this was real.
Even a child could tell you that professional wrestling was a fraud, which is why he jumped at the chance to work matches like this one. Matches where the blood flowed, where he could feel the power of his hands pounding flesh, cracking bone, the energy of the crowd driving him. The feeling, it was something his wife, his children, his few friends outside of the ring would never understand, or that none of the mattered in the least compared to this.