Nothing but Whoring and Filth from Start to Finish: The American Tragedy of William Lindsey Gresham by Jimmy Callaway 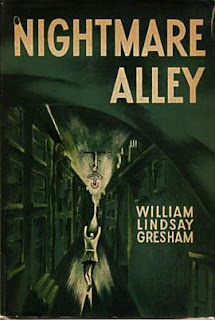 The first book assigned in my sixth grade reading class was C.S. Lewis’s The Lion, the Witch, and the Wardrobe, part one of The Chronicles of Nar­nia. I lost complete interest within forty pages. A buncha fruity limey kids and their goofy talking lion. Bah. Plus, looking back at this particular assignment as well as some key comments Miss Chapman made in class, I’m relatively certain now that this (otherwise nice enough) lady was trying to in­doctrinate us into the ways of the one true Christian God. All the more reason I’m glad I paid more attention to Comics Scene instead.

This became an old saw: my teach­ers trying to get me to read boring garbage like Where the Lilies Bloom while I insisted on reading stuff like the noveliza­tion of Total Recall. I never lost my passion for reading, es­pecially for reading that spoke to me, although I had more than one English teacher attempt to rip that from me along with my self-worth and poor penmanship.

My senior year in high school, I discovered the (now) late, la­mented crime-zine Murder Can be Fun. John Marr’s nearly blis­tering passion for crime litera­ture, as well as minimalist lay­out and scathing tone, instilled in me a love for the genre which has not abated in the slight­est. In particular, his book review section, “Read Hard or Die!” was indispensable to me as a young high school grad on the rise in the rapid-growth indus­try of graveyard-shift gas sta­tion attendance. It was within these meticulously typed pages that I first heard of William Lindsay Gresham’s Nightmare Al­ley.

When I first pitched this piece to Crime Factory, it was going to be an essay on the entire sub-genre of carny-noir, those stories set in the seamy world of the traveling carnival. A couple of things almost imme­diately put the kibosh on this idea. Firstly, Michael S. Chong has already written “Carny Noir: Bearded Ladies and a Man-Eat­ing Chicken,” a fairly complete piece of research to which I’d be able to add little. Second­ly, many of the novels are so rare and out-of-print, it would cost me a small fortune to ob­tain enough research material.

But most of all is the bare fact that Nightmare Alley is the de­finitive novel of its kind, if for no other reason than that the masterful execution of the story allows the book to tran­scend all generic trappings to prove itself a pure example of American tragedy.

The basic structure of the classic tragedy is the sto­ry’s protagonist rises to great heights, but because of a fatal flaw, is brought horribly low. This form of story-telling re­mained immensely popular for thousands of years, going back to the ancient Greeks, only to be almost completely uprooted, it would seem, by 1950 or so. Post-war America didn’t really wanna be bummed out anymore, and since Western culture tends to be a pretty driving force, this trend of happy endings remains dominant today. Even when you come across a particularly de­pressing piece of literature, it rarely holds to the classi­cal structure, more often opting for the vast post-modern ennui of existentialism and nihilism (nothing wrong with that, of course).

Although Nightmare Alley was first published in 1946, the time Gresham spent gathering re­search for this novel and for the non-fiction Monster Midway was smack in the middle of the Great Depression. When you add to that the man’s own life-long strug­gles with alcoholism and what would probably be diagnosed to­day as severe depression, you have an extremely fertile ground for tragedy writ large. Also, Gresham’s obvious interest in Freudian theory soundly rounds out the tragic atmosphere; they don’t call it an Oedipal complex for nothing.

The story opens on young Stan Carlisle, an amateur magician helping run the mentalist act at the Ten-in-One show. The junior huckster is eager to learn all the ins and outs of the fortune-telling racket, almost as eager as he is to get into the pants of Zeena, the show’s palm- and mind-reader. Early on, we see that Stan is willing to pull out all stops to get what he wants. And why not? He’s young, good-looking, and smart enough to talk himself out of the tightest situations. After the life he’s had so far, he feels he deserves what’s coming to him.

Eventually teaming up with the innocent, doe-eyed Molly (her­self something of an Elektra poster-girl), Stan leaves the carny to go into business for himself. Becoming the Rever­end Stanton Carlisle, he begins fleecing the lonely rich widows who come to him looking for evi­dence of life after death. And again, why not? Like any drug dealer worth his salt, Stan’s just giving them what they want most, and if they don’t get it from him, they’ll just get it elsewhere.

The psychology of Stan’s char­acter runs to chilling depths. Saddled with a holier-than-thou father whom he despises—a hatred he projects onto nearly every au­thority figure with whom he comes into contact—Stan was also left with deep emotional scars after his mother ran off with the local singing instructor.

Abandoned at such a young age, Stan turned to magic to affect some measure of control over his reality and, eventually, that of others. Yet even during his highest triumphs, Stan is plagued with a recurring nightmare: running down an al­ley into a blinding light, death ever at his heels. We all have a nightmare alley, Stan rea­sons, but he’s also managed to convince himself that he’s going to come out the other side.

Gresham didn’t just craft a clas­sic plot, but his technique is unbelievably subtle, especially for a novel that seems to view life, as Stan says, as “noth­ing but whoring and filth from start to finish.” However, it only makes sense, with a pro­tagonist who relies so heavily on prestidigitation, that the author would not be quick to give away his tricks. Each time Stan pulls off a momentous scam, the reader is forced to fill in the blanks as to exactly what happened. Gresham often accom­plishes this by adding a sort of P.S. to certain chapters, where the point-of-view is from some­one peripheral to the action—a cab driver, a morgue attendant, a railroad bull. This refusal on Gresham’s part to fully disclose every detail not only makes him a boon to pulp fiction, but to story-telling in general.

There’s also a level of irony at work in the story, one which creates a sort of tension one can only find in the best psy­chological novels. As stated above, it is clear that Gresham was at least passingly familiar with the works of Sigmund Freud, which would not put him in an exclusive club for any author of the time. But Gresham also sets up one of the most debilitat­ing femme fatales the genre has ever seen, one Dr. Lilith Rit­ter. She begins her association with Stan first as an ally, help­ing him pick out a prime mark, one who will give the big pay-off. Then she becomes his lover as his physical obsession with her increases, then his enabler as he begins the slide into al­coholism, and finally his puppet master, the one who truly pulls the strings. The fact that Dr. Ritter successfully utilizes Freudian analysis to finally con­vince Stan that he is insane can be considered quite the juxta­position, since Gresham himself leans so heavily on those theo­ries to characterize his pro­tagonist. What Gresham seems to be getting at overall by cast­ing Ritter in this light is that even though Stan has risen to the level of supreme confidence trickster, the true artists of the form hold Ph.D.s in psychol­ogy.

What remains probably my favor­ite rabbit that Gresham pulls out of his hat is, at this point, he begins to lead you toward a happy ending. Once Ritter wrings Stan out, he hits the skids. He’s a wanted man, and he rides the rails, becoming more and more of an animal as his slide down­wards continues. But then Stan’s nightmare finally comes true: the alley. Stan comes out on the other side of it, but far from being intact. But as soaked in brandy as his brain is at this point, even Stan realizes that if he doesn’t clean up his act and quickly, he’ll not only be destitute but dead, either by his hand or another’s.

So he goes home again. Back to Zeena, ever the mother/lover figure, and back to the carny. It looks like things will work out after all, and despite what a bastard Stan is, the reader feels a sense of relief that, even at a man’s lowest ebb, he can still find love and sanctity in himself and his friends. As half-man acrobat Joe Plasky says of Stan, “That guy was never born to hang.”

This proves to be the only time the wise Plasky is wrong. And as if to illustrate just how tenu­ous is the grip of anyone on his or her sanity, all it takes is a single headline, read almost by accident, to finally send Stan over the deep end. Stan, having risen, fallen, and risen again, has nowhere to go at this point but down, even further than he or any respectable human being has before. Gresham, with an evident glee, pulls the rug out from under this tragic figure, and the reader shares that sink­ing feeling in the pit of the stomach as the book ends.

By all accounts, Gresham’s per­sonal life was not all that far a cry from his fiction. Apparently himself a raging al­coholic and a wife beater, Gresh­am eventually drove off his wife and the mother of his two sons, Joy Davidman, to whom Nightmare Alley is dedicated. Herself a writer, Davidman had struck up a loving correspondence with an­other writer, whom she went on to marry. That writer was C.S. Lewis, creator of The Chronicles of Narnia.

If by a man’s works you shall know him, then C.S. Lewis was a kind and gentle soul who tru­ly believed in the teachings of Christ and the Sermon on the Mount. On the other side of that coin, William Lindsay Gresham was a bitter and disturbed man, who took his own life in 1962, dying in the relative obscurity of a flophouse hotel room.

The works of C.S. Lewis are adored the world over, trans­lated into over thirty languages and adapted into stage plays, TV specials, and movies. His mes­sages of universal morality and a rational approach to Christi­anity have won him as converts many sixth grade reading teach­ers.

You ask me, though, I say fuck all that shit. Gimme Nightmare Alley any day of the week 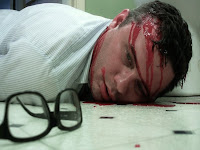 y Callaway is an enigma wrapped inside a conspiracy wrapped inside a riddle wrapped inside a bourbon soaked, deep fried twinkie. His short fiction has appeared in Plots with Guns, Thuglit, A Twist of Noir, Title Fights, and many other virtual dive bars. He blogs about funny books and what not at Attention, Children. Sequential Art

(Nothing but Whoring originally appeared in Crimefactory #2, which you can find right HERE)