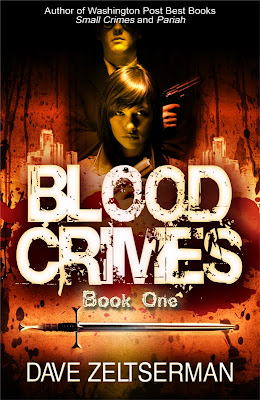 In recent years, Dave Zeltserman has become one of the most prevalent and prolific crime novelists to emerge from the 2000’s. His loose ‘Man Out Of Prison’ trilogy—Small Crimes, Pariah, and Killer—were critically lauded by media outlets as far ranging as NPR, the Boston Globe, Publishers Weekly, and the Washington Post, describing the three novels as:

“…..A thing of beauty: spare but ingeniously twisted.”

“Spare prose and assured pacing place this above most other contemporary noirs."

Since publishing the trilogy, Zeltserman has gone on to garner further acclaim with his satirical supernatural horror novel, The Caretaker of Lorne Field, and with his most recently published heist thriller, Outsourced.

Zeltserman has also gone on to be a pioneer in the realm of eBooks with the release of his short story collection 21 Tales, the award winning Julius Katz, and the intense pulp novel, Blood Crimes.

On February 15th I had the distinct pleasure of sitting down with Zeltserman at the Poisoned Pen in Scottsdale, AZ to discuss Blood Crimes, Outsourced, his experiences with the publishing and film industry, and his upcoming writing projects.

I hope you enjoy