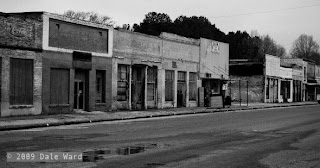 When You’re Growing Up In A Small Town/ You Hate It And You Want To Get Out.’ Lou Reed.

‘The lowest and vilest alleys in London do not present a more dreadful record of sin than does the smiling and beautiful countryside.’Sherlock Holmes

And small town America seems to be even worse. If we go by films, books and television - Twin Peaks, Blue Velvet, The Killer Inside Me, Lolita, Red Rock West - then small towns are dark and sinister places. Claustrophobic and repressive, they are much more suited to noir than the bright lights of the big city with its limitless possibilities. Noir is for losers, after all...

Maggie Greenwald’s cracking film version of Jim Thompson’s small town noir novel ‘The Kill –Off’, for example, starts with a shot of dozens of intersecting telephone lines buzzing with gossip and small town prattle, criss crossing and trapping you. Thompson’s novel is just as smothering with its multiple POVs and every character having a finger in someone else's dirty pie.

Dave Zeltserman’s ‘Small Crimes’ shows a man trying to escape the past but his home town keeps dragging him back like an umbilical cord tied tight around his neck!

In Scott Phillips’ dark comedy of errors ‘The Ice Harvest’ the hero Charlie Arglist, has big plans to get away from his small town blues and he is less than twenty-four hours away from escape but those old faces, places and habits keep hauling him back.

And look at Frank Capra’s terrifying noir classic ‘It’s A Wonderful Life’ Poor George Bailey has plans the see the world and have adventures. But will those resentful hicks of Bedford Falls let him go? No! So, he tops himself. But even in death he can’t escape. A supernatural creature appears and drags him back ‘home’! It’s like that Sartre play where hell is other people, it really is.

And scariest of all, Bill Murray starts Groundhog Day as a funny and intelligent man but after being tortured by repeating the humdrum routine of a uber-bland town he loses his spark and his wit so much that he even fancies Ali Macdowal, or whatever she’s called. Now that is chilling! 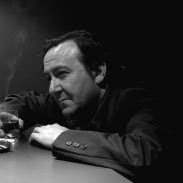 Paul D. Brazill’s story The Tut was nominated for a 2010 Spinetingler Award & he'll have a story in The Mammoth Book Of Best British Crime 2011, which is very nice indeed. His blog, You Would Say That Wouldn’t You? is here: http://pdbrazill.blogspot.com/