RABID CHILD and the Bad Girl Tradition by Peter Risley 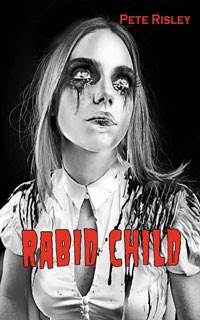 When I first started reading Rabid Child by Peter Risley, a slight involuntary shutter ran through my entire body. The protagonist, Desmond Cray, was one of the most repulsive characters I’d encountered in a number of years, but Risley’s sharp, surrealistic prose drew me deeper into Cray’s depraved world and my sympathy for the character grew and like a bloody ten car pile up, I couldn’t avert my eyes and had to continue reading. Recently, Mr. Risley contacted me and I asked him to write the following piece on Rabid Child and his evolution as a novelist. I hope you enjoy—K.R.

RABID CHILD and the Bad Girl Tradition by Peter Risley


I'm very flattered that I've been invited to write a brief piece about myself and my debut novel RABID CHILD for DAY LABOR. However, I'm afraid there's nothing very interesting about my background that I can relate. I'm a writer from Columbus, Ohio who's had a long and rather difficult apprenticeship. Unlike many of my fellow wannabe scribes, over the hard years of learning my craft I’ve never worked as a lumberjack, short-order cook, bouncer, hotel detective, jazz musician, Chippendale dancer or male prostitute. I do have a day job, clerical, but I'd rather not say where. I'm not married and have no children. I've never done much traveling, either. There’s really not much to say about me. I like old Hollywood movies, but who doesn’t?

OK, here's something -- you know those cartoon tracts put out by the Christian fundamentalist publisher Jack Chick, 'This Was Your Life!' and so forth? I have a sizeable collection of those, accumulated one by one over the years from people handing them out on the street. And this little interest of mine does have something to do with RABID CHILD.

RABID CHILD is my first published novel. I failed to complete the first novel I attempted, a cozy mystery about a string of cat-detective slayings investigated by a hamster and goldfish pet detective duo (no, I'm not kidding). I (wisely, I think) decided to try a noir scenario instead. I think it's fair to say that the main influences on my novel, the writers I most wanted to emulate, are Nathanael West and Jim Thompson. I hope that readers who esteem those two writers might take a look at RABID CHILD and see if those influences are apparent.

Readers may notice as well that a character in RABID CHILD named Mr. Wince uses some phrases that are reminiscent of a very familiar figure in a classic 19th century American novel. This may sound like a rather sophomoric literary joke, but I felt there was good reason to present Mr. Wince in this way.

My novel deals with some very grim and controversial subject matter; with perverse sexuality, religious fanaticism, dementia, misogyny, abortion, the abuse of children, and the devastation of a family. Despite this, a lot of it is intended to be not only dark, but funny as well. However, I wouldn't want anyone to pick the novel up thinking it was going to be a rollicking, willfully outrageous laugh-fest. The protagonist, Desmond Cray, is a child molester. In fact, by my judgment and my intention, the story involves a lot of shame, despair and anguish. I never intended it to amount to cheerful-nihilism-as-uplift, as black-humored fiction is sometimes conceived to be.

The strain in American crime fiction that interests me the most has to do not so much with urban street vibes, criminal enterprise, police procedures, etc, as with human perversity, and not only, or primarily, in a sexual sense. The anecdote in Dashiell Hammett's great THE MALTESE FALCON (1930) about Flitcraft, the man who starts his life over after nearly being crushed by falling beams, only to end up living as he did before but with a second wife and family, interests me as much as the tale of the struggle over the rara avis itself. I wouldn't wish to choose one over the other, I like having them together in the same sharp-eyed and sharp-elbowed work.

I don't wish to reveal too much about the plot and characters of RABID CHILD in this piece, and I certainly won't make inflated claims for it. It's fair to say, however, that my novel at least attempts to deal with some key themes and characteristics of noir fiction. I understand that there's a fair amount of discussion in academic studies that cover the work of Hammett and Raymond Chandler, in particular, of the figure of the 'femme fatale' as represented in THE MALTESE FALCON by Bridget O'Shaughnessy, and in Chandler's THE BIG SLEEP (1939) by the Sternwood sisters.

What's striking to me is the moralizing condemnation of these sultry female vipers (not that they're all the same, not at all) made by male characters (the heroes) in these classic noir novels, and the fact that alluring female sexuality is, not only in these works but frequently throughout the genre, an aspect of the perceived menace in these young ladies. Many will remember Philip Marlowe becoming so enraged at the remaining imprint of slutty and crazy Carmen Sternwood's nude form in his bed after he's thrown her out of his home that he tears the bedclothes apart "savagely." Sam Spade in MALTESE FALCON, a far more cold-blooded fellow than Marlowe, finally dispatches Bridget with the line "I won't play the sap for you." Beyond that, as a moralizing/punishing male rejection of femme fatale attempts at seduction, lies Mike Hammer's famous and brutally sexual final riposte in Mickey Spillane's I, THE JURY (1947).

The main female character in RABID CHILD, Tracy Honnecker, can be judged yet another variation on the femme fatale figure, but is presented a little differently from what could be called the norms of the tradition. No one should mistake me for a supposed 'male feminist' due to this. I'm not sure whether anyone will, or if anyone will even care to speculate that much about the novel, and about its author's views. In case anyone does care, however, I'll just assert that despite the grim humor of the novel, I take these matters seriously.

In any case, let me advise that anyone who finds RABID CHILD offensive or disturbing after the first couple of chapters should probably not read the rest of it. Perhaps I should add that neither Desmond Cray, Tracy Honnecker nor any other character in the novel is based on a real person.