The Best of Whatever—Andrew Nette

Garry Disher, Wyatt (Text Publishing): Australia's answer to Parker. Wyatt is an old-school heist man increasingly out of sorts in a high tech world. Veteran Australian crime writer Garry Disher wrote six Wyatt novels in the nineties. It was nearly a decade before he would produce a seventh, Wyatt, in 2010. Great writing and a tough, gritty plot. Here's hoping it won't be another ten years before the next one.

Martin Limon (Soho Crime): Jade Lady Burning: I don't know why it took me so long to discover Limon, but now I have I'm a convert. Hard-boiled action on the streets of seventies Seoul. What's not to like.

Megan Abbott, The Song Is You (Pocket Books): The woman who seems to be on everyone's list of best reads for 2010. Probably because she's so bloody good.

Richard Stark, The Handle (University of Chicago Press): I knocked off a few of the Parker novels pre-1997 Parker novels this year. The Handle was the best. Parker is employed by his nemesis the Outfit to knock over a casino on an island in the Gulf of Mexico.

David Whish Wilson, Line of Sight (Penguin Viking): A great tale of corrupt cops and the murder, set in seventies Western Australia (yeah, I know, there's a bit of seventies theme going on). Great stuff, partly based on fact.

Jame's Ellroy, Blood's a Rover (Century): Not Ellroy's best, but an average book by Ellroy still makes my top 10.

Angela Savage, The Half Child (Text): Full disclosure, Angela is my partner and he book set in Thailand featuring female PI Jayne Keeney is great.

Peter Thompson, Pacific Fury (William Heinemann Australia): A brilliantly written warts and all account of WWII in the Asia Pacific from an Australian perspective (that means there's heaps of detail on what self promoting bastard MacArthur was). 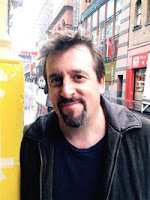 THE AUTHOR: Andrew Nette lived in Southeast Asia for six years in the nineties and was based in Laos, Vietnam, Cambodia and Thailand, as well as traveling around the wider region. Nette has reviewed film and books for Crime Factory, Friday’s Forgotten Books and Back Alley Noir, the official on-line forum of the US-based Film Noir Foundation. He has also completed a crime novel titled Cambodia Darkness and Light. You can read more of his reviews at Pulp Curry