The Best of Whatever—Jason Duke

This was a very exciting year all around, but looking back, the top of my list for 2010 was Bouchercon in San Francisco. I got to meet a lot of wonderful crime writers, hang out at parties like the one Mulholland threw at Gordon Biersch, and drink ridiculous amounts of liquor. I also bought a lot of books while I was at Bouchercon, some were bought for me, and some were given to me. I haven't had a chance to read all of them yet, but most of these books on my list I picked up at the con:

Hogdoggin' by Anthony Neil Smith: granted this isn't from 2010, but it's still my favorite because I really dig Neil's style. Also check out Yellow Medicine, the first in the series (I hope this will be a series, you hear me Neil?)

Do They Know I'm Running by David Corbet: this one I was fortunate to pick up from David himself when he read from it at the City Lights black envelope event. Some of it deals with soldiers and Iraq, which is right up my alley.

Last Known Address by Theresa Schwegel, Jump by Tim Maleeny, One Too Many Blows to the Head by Eric Beetner and JB Kohl: also not from 2010, but great books nonetheless and definitely worth reading.

Pike by Benjamin Whitmer, The Underbelly by Gary Phillips: two I picked up from the PM Press booth at Bouchercon. Gary never disappoints, and Ben's first book Pike will knock you on your ass.

Young Junius by Seth Harwood: what can I say, this book is all kinds of dope, and not because there's a lot of drugs and drug dealing going on. Plus, the special edition was a really nice touch, with the extra artwork and cloth cover, if you preordered like I did.

Killer Tease by Danny Hogan, Broken Dreams by Nick Quantril: a little shout out to my blokes across the pond. Don't get me wrong, all of the Pulp Press line is top notch, this one just happens to be my favorite. A big plus for me because I'm a lazy reader is that these books can all be read in about an hour or so. And Nick hit it out of the park with his first try with Broken Dreams, featuring his private investigator Joe Geraghty. I expect more grandslams in his future, and lots more of Geraghty. 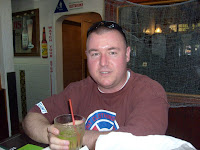 ABOUT THE AUTHOR: Jason Duke is a Sergeant in the U.S. Army with a 15 month deployment to Iraq under his belt. His stories have appeared in Plots With Guns, Thuglit, Spinetingler Magazine, Crimefactory, Crimewav.com, Darkest Before the Dawn, and A Twist of Noir, among others. Jason can be reached at dm_jasonduke@hotmail.com or on Facebook
Posted by Unknown at 11:47 AM