Rawson’s best of Whatever—#8: Savages by Don Winslow 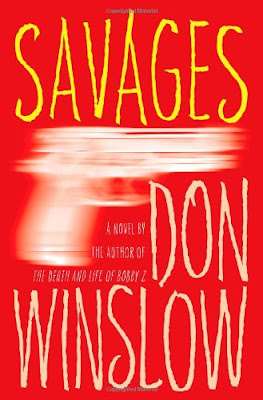 It’s either one of the campiest opening chapters of a novel ever written or one of the most innovative.

But it sets the tone perfectly for Don Winlow’s masterful novel, Savages.

Savages is the story of Ben and Chon, two high end pot dealers whose personalities are a literal yen and yang—Chon is an enraged ex-navy seal and Ben an unfocused world saving progeny of two wealthy psychologists—who, realistically, have nothing in common other than their expertise at growing high end herb and their unflappable devotion to their slacker (I really could find no other word which more appropriately describes her) shared girlfriend Ophelia, but for one reason or another their partnership works and has made them both very wealthy.

Not long after Ben returns home from one of his ‘humanitarian’ trips to an impoverished 3rd world nation, Chon shows Ben a video of six decapitated drug dealers. The video is sent by a ruthless Baja drug cartel. They want Ben and Chon to become partners with them and if they don’t…..

Neither Ben or Chon want anything to do with the cartel, so instead of partnering with the cartel, they decide to walk away with the vast amount of money they’ve earned and move on with their lives. The cartel’s response to Ben and Chon’s counter offer is to kidnap Ophelia and force them into working for the cartel, or to pay off what the business may gross over its life time.

The boys decide to go for the pay off by ripping off the cartel which has taken Ophelia.

The novel’s clipped, ultra fast paced language perfectly captures the new dialect of a generation weaned on the Internet and text messaging. The stylized prose is vastly innovative for an American novelist, bringing to it a staccato rhythm (I don’t think most reviewers have pointed out that certain passages and chapters very much mirror the writing style of Ken Bruen.) which drives the narrative with neck break precision, forcing the reader to turn pages as if they were scrolling through an absorbing website. Although Ben and Chon are the focus of the novel, it is Winslow’s supporting cast which, for me, drive the novel. Ophelia is vacuous, an almost non-entity who is looking for someone—anyone—to provide some sort of direction in her life, and yet she is the force who drives Chon and Ben. The head of the Baja cartel, Elena, has the feel of someone who has had the violent legacy of her family laid upon her shoulders and she has no choice but soldier on despite her lack of desire. And Elena’s U.S. enforcer, Miguel Arroyo aka Lado—a character which Winslow could’ve allowed to easily slip into parody—in every way mirrors the American capitalism at its most perverted.

Winslow has been a long time favorite (The Power of the Dog is absolutely classic and in my opinion ranks as one of the all time great modern crime novels alongside Ellroy’s L.A. Confidential and Bruen’s the Guards) and with Savages he’s cemented himself not only as great crime writer, but as a great contemporary novelist, and out of all the fantastic crime novels I’ve read this year, it is the one which I have pressed into the hands of casual readers of crime fiction the most.