The Best of Whatever—Steve Weddle

Without a doubt, the greatest “new to me” discovery of 2010 was this Coke Zero thing. I hadn’t had soda in probably 15 years. In college I’d down about 17 gallons a day, but I’d given it up for some reason. Chemicals. Sugar. Hell if I can remember. So when I went low-carb in May and had to give up every food and beverage group I hold dear, I looked for replacements. Sausage and eggs instead of Froot Loops. A pint of Jack Daniels instead of a fifth. And Coke Zero instead of sweet tea. It fizzes. It tingles. It spreads its sweet syrup down the gullet. Ah, good times.

And, of course, there were books.

The Damage Done by Hilary Davidson.

I’ve said it before and I’ll say it again: Not only is this the best debut I've read in a while, this is the best book I've read in a long time.
Sharp and quick, you're moving along with Lily here as she tries to find out what happened to her sister.

A collection of stories from an author whose work has appeared in AHMM and EQMM and Spinetingler? What’s not to love? These are billed as stories of suspense, crime, and horror. Turns out, each story has all of those qualities. Honestly, I’ll never hear mice in the walls quite the same after reading this ebook.

Skating Around the Law by Joelle Charbonneau

This might be the only cozy I’ve ever read, but it won’t be the last. I’ll read the next one in the series.
Many people have written about the camel in this one. Or the sexually over-active grandfather. What they fail to mention is the food fight in the diner. Can your murder mystery pull that off?

This is JHJ’s zombie/post-apocalypse novel, and it’s full of brilliance. The plotting, the character development, the sorrow, the fear. This is one of those novels I read that I find myself thinking
of months later, for no reason at all.
JHJ’s novel Southern Gods is coming out next year from Night Shade Press, and I’m sure I’ll love that one as much, though it doesn’t seem possible.
What scares me about the publishing industry is that no one has picked up This Dark Earth. I mean, it doesn’t scare me as much as the book did, but still.

Reading a good deal of noir fiction, I’m kinda hardened to the idea of the good guy in the book being a bad guy. Oh, a tough guy with a heart. How fresh, right? So when I read Pike and the idea of good and
bad started to lose all meaning, I found myself reading the story on a whole new level. From the discussion we’re having at the DoSomeDamage Goodreads book group, this book is a favorite of many.

This one didn’t come out this year, but it’s new to me. What a great read. If I still had a heart, this book would have broken it seven or eight time. Just a horrible, beautiful story that claws down to the very depths of whatever it means to be a human.

This site for generating names: http://www.kleimo.com/random/name.cfm A heckuva great tool for a writer.

All the great writers out there I’d never read. Sure, we get a ton of submissions over at NEEDLE, which started this year. We read some great stuff. But there’s also the great Crimefactory, which started this year. And A Twist of Noir, which is really hitting its stride as of late. Not to mention Plots with Guns and Beat To A Pulp. The noir community is putting out some fantastic writing, and that’s a great discovery ever day. And on top of that, sites such as Christopher Rhatigan’s Death By Killing and The Rap Sheet and others –including Crimespree Magazine and Mystery Scene Magazine – help keep me on top of what’s out there and worth reading.

OK. So I kinda crammed a bunch of stuff in that last one, so let me end with this: puppies. 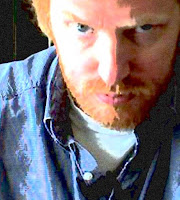 ABOUT THE AUTHOR: A former English professor, Steve Weddle has an MFA in poetry and hates guns.Every Monday, he takes a break from being a complete sissy to blog about crime fiction at DoSomeDamage. Weddle also works with John Hornor Jacobs on NEEDLE.This year his short fiction has appeared at Beat To A Pulp, Crime Factory, and A Twist of Noir.

Email ThisBlogThis!Share to TwitterShare to FacebookShare to Pinterest
Labels: 8 Pounds, A Twist of Noir, Beat to a Pulp, Crimefactory, Mystic River, Needle, Pike, Plots with Guns, Skating Around the Law, the Damage Done, This Dark Earth