The Best of Whatever--Anthony Neil Smith

I love year-end Top Ten lists. I do. I hate writing them. I do. I hate them for the same reason I love them: I want to be on them, and if I’m not, I get mad at the person who left me off. So why would I do the same shit? Except, I will when it has nothing to do with books or writing or authors or…or writing…or etc. Of course, I use a lot of Top Ten lists to find new stuff to read, hear, taste, etc.

So here’s my Top Ten General Stuff of 2010 list

10) The ribs at the Hitching Post in Marshall, MN. They make great ribs. Consistently. Fall off the bone. Good ribs. This joint is sandwiched between a Super 8 and a gas station, and half the sign has fallen off.

9) NoirCon 2010. It was a week after I had put on the crazy whirlwind of Marshall Festival, and I was dead tired. I didn’t want to get on the plane. But I did and it was fine. Turned out that I had a fantastic weekend with some great writers and friends and beers at the German place and George Pelecanos punching out Jed at the Mummers Museum. Awesome. I needed that, guys. I really did.

8) Seeing MacBeth at the Guthrie Theater in Minneapolis. Holy shit, we were right up against the stage, in the “spit zone”. It was sweet. This was a bad ass Macbeth, a mesh of time periods and styles and and and, fuck, Macbeth just shot a guy!

7) The season finale of the Venture Brothers. “Operation P.R.O.M.” was an hour long, and was one of the craziest eps I’ve ever seen. Kudos.

5) This picture of Sarah Palin from TIME Magazine.

4) The Mulholland Books website. A place for smart crime fiction. You can tell from these posts that the people in charge are not looking for run-of-the-mill airport dumb-down thrillers. If they’re going to put out a book, it’s gotta be some strong medicine. God, I hope so.

3) Layer Cake Primitivo. The absolute best wine I’ve tasted in over a year. I’ve had two bottles of Layer Cake—one Shiraz and one Primitivo. Both were excellent.

2) Some stupid thing. I forget. 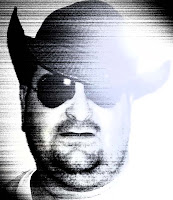 ABOUT THE AUTHOR: Anthony Neil Smith is the author of four novels--Psychosomatic, the Drummer, Yellow Medicine, and Hogdoggin'. He also edits the baddest zine on the web PLOTS WITH GUNS.