Rawson’s Best of Whatever—#7: Dodging Bullets By Joe Mckinney 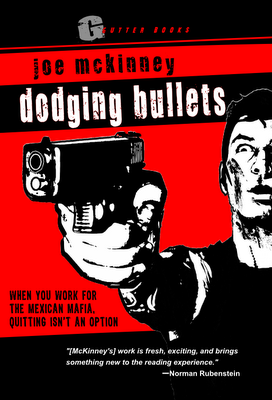 Raise your hand if you know who Joe Mckinney is?

Right, he’s the guy who wrote those kick ass zombie novels Dead City, Apocalypse of the Dead and Quarantined. He’s also a police officer with the city of San Antonio, Texas.

But did you know he wrote crime fiction?

Yeah, I imagine some of you did.

He’s made a few appearances in Out of the Gutter and his novel, Dodging Bullets, was the first full length release from the newly minted Gutter Books. (Yup, the same crew that brings you Out of the Gutter magazine.) Now don’t get me wrong, I dig Officer Mckinny’s horror stories, (I tend to love horror fiction where Armageddon is the focus of the storyline, especially if corpses come back to life and ravage the survivors) but the man has a serious knack for crime fiction.

Dodging Bullets is the story of Peto. Peto is your average heroin dealing piece of shit, the difference being is the man is deeply in love with uber rich girlfriend, Shannon Dupree. Peto would do anything for Shannon, he’s convinced they’re soulmates, so, of course, anything means stealing account ledgers which proves Shannon’s father—Waylon Dupree, a high priced lawyer who happens to make most of his cash representing Peto’s employers, the local Mexican mafia—has been embezzling loads of cash from his ruthless, blood thirsty clients. The ledgers are in the possession of Peto’s mentor and supplier, Fernando Laza. Peto breaks into Laza’s house, steals the ledgers, plus a shitload of cash and heroin.

When Laza discovers the theft, he frantically calls Peto asking for his help. Laza has no idea Peto was the one who ripped him off and instead suspects a prostitute he picked for an evening of fun and games. Peto agrees to come over, but little does he know that Laza also calls his boss, Frankie Rodriguez, the head of San Antonio’s Puro Eme. When arrives at the house to find the whore bound and gagged and Frankie wanting to know where his heroin is? The prostitute is quickly dispatched, using her death and disposal more as a means of interrogating Peto and Laza, who he suspects were the true thief’s of the hefty stash.

Soon after the prostitutes murder, Peto is busted by the San Antonio police and he’s convinced into narcing out Laza. He returns to Laza’s house wearing a wire and is turned out as the rat he is, taking a solid beating from Laza, who’s killed during the police raid Peto helped or orchestrate. After this, Frankie is 100% positive Peto is the thief, and begins to tear Peto’s fragile existence with Shannon to pieces.

Dodging Bullets is an intense, sparsely written read along the same lines as the classic Fawcett-Gold Medal paperbacks of the 50’s and 60’s, (Yeah, I know, a reviewer offering up this kind of comparison is becoming a cliché, but when it’s true, what other association can you use?) the difference being that each page rocks with violence and action without becoming cartoonish. McKinney crafts Peto into a sympathetic protagonist, albeit you never feel sorry for the bloody situations in which you find him in. As a reader, you understand he’s getting what he deserves after a life time of scumbag entitlement, but you desperately want him to grow beyond his tumultuous life and to finally have some kind of normalcy with Shannon (little bit of a spoiler here, folks, it ain’t gonna happen.)

But for lovers of the brand of hardcore, hardboiled crime fiction that is the hallmark of Out of the Gutter, you can’t go wrong with Dodging Bullets.

Email ThisBlogThis!Share to TwitterShare to FacebookShare to Pinterest
Labels: Dodging Bullets, Gutter books, Joe Mckinney, Out of the Gutter