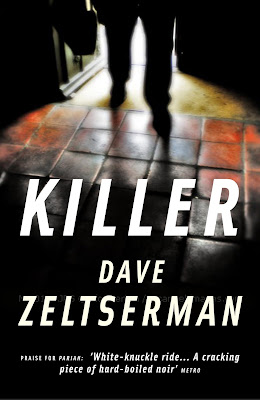 Okay, before I get started with this, I'll give you the skinny. Like most of the contributors who've sent me lists so far, my selections are in no particular order. I enjoyed each of the books I'm spotlighting equally with no bias towards any particular title.
With that said, here we go.

One of the near constants I've been running into while reviewing the top tens I've received so far is that one name keeps popping up:

And this is with good reason, over the past year Dave Z has released 4 stellar projects (Killer, the Caretaker of Lorne Field, the Kindle release Vampire Crimes, and 21 Tales) but for me, the conclusion to Zeltserman's loose 'Man Out of Prison' trilogy was one of the highlights of my reading year. Below is my review of Killer, which originally appear over at Spinetigler, plus the video trailer for the novel.

There are few novelists working in crime fiction who are as prolific and produce such high quality novels as Dave Zeltserman. The first two novels of Zeltserman’s loose ‘Man out of Prison’ trilogy—Small Crimes and Pariah—have both made my year end ‘best of’lists and for good reason and with the release of the third of the trilogy, Killer, it will easily make that list yet again.

Killer is the story of Leonard March. March has spent the past fourteen years in prison after turning state witness against his former employer, mob boss Salvatore Lombard. As a condition to his plea bargain March had to admit to his past crimes, which just happened to include 18 contract killings. Needless to say, the public and the press are plenty pissed when Leonard is released and are screaming for the old sociopaths blood the second he steps foot on free soil. Of course, all Leonard wants is to be left alone to work as a janitor and lead a quiet life in his shitty basement apartment reading library books, cope with his incessant migraine headaches, and maybe reconnect with his estranged children

None of this is going to happen.

Almost from the moment March walks out of jail he’s being hounded by the media, people on the street treat him like a leper, plus he’s receiving threatening phone calls from his former crime family and waiting for the inevitable bullet to the back of the skull. March’s only solace is eating at greasy spoons and in the company of a seemingly damaged young woman named Sophie.

Right off the bat let me tell you that Killer is the best of the ‘Man out of prison’ trilogy. Don’t get me wrong, the casual psychopathic meanderings of Joe Denton in Small Crimes was a sinister treat and the over the top violence and subtle social satire of Pariah was out-and-out brilliant. But with Leonard March, Zeltserman has found a wholly empathic narrator. Readers will connect with March and feel for his struggle to assimilate into a society that he was never really apart of and will be enthralled with how Zeltserman craftily alternates the story lines between March’s dismal present and the chapters which detail his evolution as a hired killer

As with his previous novels, Zeltserman’s prose is stripped down gutter poetry and his voice has never seemed as confident as it is with Killer.

What truly drove the narrative of Killer for me, though, was the humanness of March. He appears so frail, so out of sorts and institutionalized, as if he’s simply traded one type of prison for another once he’s left jail. Of course, the honesty of the narrative and its protagonist is brought into question once you reach the end of this incredibly satisfying, fast paced novel.