The Best of Whatever--Kieran Shea

What’s this now? Oh Christ. A top ten best of list? Really? No way am I doing a top ten best of for you. Have you any idea how much I read, how all over the board that reading is? It’s ridiculous. Like Crimespree turbo-Jordan-ridiculous. I've got sci-fi, I've got westerns, I've got philosophy....oh, all right. Stop your whining Comic-wise? Get hip and get wise to Greg Rucka’s STUMPTOWN while there’s still a pause in the action. Saw Mr. Rucka at the B’con bar this Fall and he promises more. Also, I know it’s relatively new but jump on board with the spree killer pre-Katrina cop drama SWEETS by newcomer Kody Chamberlain. What else? Can’t say enough about Ba and Moon's DAYTRIPPER or Layman's CHEW. Non-fiction real life shivers? Get some of Ollestad’s CRAZY FOR THE STORM or watch Ellroy unravel like a horny roll of infected bandages in THE HILILKER CURSE. Steampunk got you fascinated? Without question read BONESHAKER by Cherie (God, I so have a crush on you, girl) Priest. You will never read another zombie novel ever. Goddamn it, if some Quackenstein ground up Lehane’s pacing and Pelecanos’ pathos and added some high-powered action sequences that takes your breath away they’d call it Tafoya's THE WOLVES OF fucking FAIRMOUNT PARK. Oh, and you know what else? I don’t care if he’s Jack Sparrow’s brother BABYLON NIGHTS (the follow up to Daniel Depp’s Shamus-nominated LOSER’S TOWN) was awesome. THE FIRST RULE shows us where the real the real Crais hangs his hat (and it ain't in no clown's a-frame in the hills.) Another kind of Pike would be, of course, PIKE by Ben Whitmer. Okay, one more. Zeltserman's THE CARETAKER OF LORNE FIELD shows you why he's the quiet Lou Piniella of crime fiction. That’s enough. You’ve had your fun. Now go away. 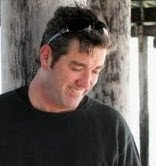 T THE AUTHOR: Jersey-born writer, gadfly, and débrouillard...Kieran Shea scratches at the eightball of crime fiction like a lot of sordid lots. Recently his work was nominated for The 2009 Story South Million Writers Award. Sometimes you can find him at 39.070388 N,-76.545241 W other times at 39.277616 N,-74.5746 W, but mostly he's at large. You can find him lurking around his blog, Black Irish Blarny