The Best of Whatever—Mike Maclean

Okay, let’s get this out of the way. I’m well aware that the previous contributors to this blog admire the works of (INSERT fancy-pants literary types HERE) with their searing portrayals of the modern human condition, shedding light on man’s innate, Freudian propensity towards self-deconstruction. But admit it, sometimes don’t you just want to sit back and watch monsters eat some people?

For those of you who screamed, “HELL YEAH,” I give you my top ten Syfy original movie moments (In no particular order).

Full disclosure: I worked on two of these and considered recusing myself from the candidates, but then realized no one gives a crap.

Sharktopus (2010): Easily the most memorable scene in the film. A swimsuit-clad chick becomes a human metaphor when she hangs like bait for Sharktopus to chomp, striking a blow for fish-kind everywhere. http://www.facebook.com/l/3462eq3Y5OJbSRl5nDyu86z3rkg;www.fancast.com/tv/Sharktopus/106799/1592253468/Bungee-Jump---Sharktopus/videos?cmpid=syn_rss

Ice Spiders (2007): When faced with the threat of massive blood-thirsty spiders, one should…
a. Die gruesomely.
b. Cower behind a sofa cushion like an eight year-old girl.
c. Beat said spider to death then make a lame joke, disregarding the fact that two people just died gruesomely in front of you.
d. All of the above
http://www.facebook.com/l/3462eOxXRVu2_0xAb2njgz0I4Ng;www.youtube.com/watch?v=LM25VV_Aq5E

Alien Apocalypse (2005): Because no list of B-movies would be complete without an appearance from Bruce Campbell. http://www.facebook.com/l/3462evB-XFzHvF2hoY4o-e3AoTA;www.youtube.com/watch?v=dEBTPZP0hro&feature=related

Dinocroc (2004): Now let’s get this straight—I get no joy out of witnessing violence towards children. I wish Dinocroc had gone after a bimbo or frat boy instead. Still, there is no denying this scene’s genuine intensity (a rare commodity among the cheese-infused Syfy films). And given the budget of these flicks (very, very low), it’s damn well produced. http://www.facebook.com/l/3462efniSvwNbIU1RPX3KyMFcsg;www.youtube.com/watch?v=6_y0hyDIJWo

Dinocroc vs. Supergator (2010): Raise you hand if you’d like to see a douche-bag movie producer brutally chomped to death by a giant, mutant crocodile (the bottom clip). This scene pisses me off because it’s my favorite part of the movie, and I had absolutely nothing to do with it. http://www.facebook.com/l/3462eIyGS8aNHBCbCGUGi599sYQ;blastr.com/2010/06/3-must-see-scenes-from-di.php

Mega Snake (2007): Lot of “Mega” going on in the Syfy world. My favorite from this gem is the scene where the guy gets chomped on the sofa while watching Mansquito. Is it me, or does he actually scream “Oh, ho, ho, ho,” as his head is being devoured?
http://www.facebook.com/l/3462eWjK4O0xH2gAEJ2F5QC7uxA;www.youtube.com/watch?v=PyT9rOTy9Tc&feature=related

I couldn’t find another good one, so here is my favorite scene from Seinfeld. http://www.facebook.com/l/3462eHPRHerk7mrD3lt_niVAj9g;www.youtube.com/watch?v=CwinnODU0yo&feature=related 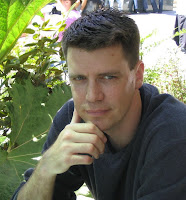 AUTHOR: Mike MacLean wrote the Syfy original movie Sharktopus and co-wrote Dinocroc vs. Supergator. In addition, his short crime fiction has appeared in The Best American Mystery Stories, Thuglit: Hardcore Hardboiled, and The Deadly Bride. Teaching high school by day, Mike lives in Tempe, Arizona with his wonderful wife and daughter. Visit him online at http://www.facebook.com/l/3462eLTjeRnQmQ4V8wmmjKZ35QQ;www.mikemaclean.net.