The Best of Whatever—Stephen Blackmoore

I have a memory like a sieve. I'm lucky to remember what day it is, where my pants are, what my name is. You want me to list the top ten anything of the last year? You're kidding right? Well, shit.


FEED - Mira Grant
The zombie apocalypse has come and gone. They're still here, sure, but the world has survived. Security measures that make a TSA patdown look like a kiss in the backseat on date night, cities abandoned to the dead and good for little more than adrenaline junkies to film their narrow escapes. The risen dead have changed everything.

Well, not everything. Politics and journalism are still around. FEED follows a team of bush-league news bloggers as they get the opportunity of a lifetime to follow the Republican Presidential campaign of 2039. A presidential race that will show them the uglier side of politics, greed, power and that, as always, the real monsters are the ones that smile and shake your hand.

Part political thriller, part horror story, FEED reads like some twisted version of Fear And Loathing On The Campaign Trail written by George Romero. Grant's world building is superb, her science is excellent and has the most plausible zombie infection scenario I've ever read.


HELLO KITTY MUST DIE - Angela Choi
Angela Choi pulls together a compelling story of a young Asian American woman trying to break free of the bonds of family tradition and discover who it is she really wants to be.

It just happens that what she really wants to be is a serial killer.

American Psycho meets The Joy Luck Club. A satire on murder, money, marriage and what it's like to be Asian in America. Hysterically funny and darkly disturbing.


SOUTHERN GODS - John Hornor Jacobs
I was lucky enough to read this novel in manuscript form. It was recently picked up by Night Shade Books. And when it comes out y'all are in for a treat. A beautifully written, gripping story of the Blues, the deep south, and, best of all, Lovecraftian horror.


SLEEPLESS - Charlie Huston
A disease is sweeping the world that prevents its sufferers from sleeping, eventually driving them mad and killing them. It has no cure. It infects over half the population. It is in every nation, every city, every town.

SLEEPLESS is Apocalypse in progress. The world has stepped off the cliff and it's screaming toward the ground at a hundred mils an hour. And in the middle of all this is a good cop, a gay assassin, and a family that is dying in front of our eyes. Fascinating, electrifying and tragic, there are passages that showcase Huston's razor edge humor and whole chapters that will break your heart.


8 POUNDS - Chris F Holm
This collection of short stories showcases an incredibly talented writer, showing a versatility many of us would kill for. Can't wait to see his books in print. A writer to watch.


THE DEPUTY - Victor Gischler
Another in a long line of great books that somehow manage to be hard-boiled noir and incredibly funny, THE DEPUTY follows fuck-up-with-the-best-of-
intentions Toby Sawyer who gets pressed into duty as a deputy to guard a body on the road. Too bad he decides to leave it for a quickie with his girlfriend. When he comes back the body's gone and thus begins Toby's descent into a comedic hell as he tries to get it back.


JOHANNES CABAL THE NECROMANCER - Jonathon L Howard
Johannes Cabal has sold his soul for the secrets of necromancy. Only his lack of soul is getting in the way of his research and he wants it back. So the Devil makes him a deal. Get the Devil 100 souls within a year and it will be returned. Fail and he goes straight to Hell.

With the aid of a demonic carnival that rides the tracks into unsuspecting towns Cabal and his brother Horst, who Cabal was responsible for getting turned into a vampire, the book reads like Something Wicked The Way Comes via the Marx Brothers and Howard has a distinct Pratchett vibe about his work.


SAVAGES - Don Winslow
The only things I can definitively say about this book is that it's both brilliant and insane. In turns funny and brutally violent, SAVAGES is the story of a pair of weed growers who run afoul of the Mexican Mafia and have their shared girlfriend kidnapped using prose, screenplays, text messages and whatever else he can get his hands on. He takes the conventions of a novel and throws them out the window to great effect.


NEEDLE MAGAZINE
Not just because they published my story FOR THE CHILDREN, but because they have an eye for amazing fiction, show a passion and a dedication that is awe-inspiring. And now I'm lucky enough to be one of the guys reading some of those incredible stories that come down the pike. It's been an honor and a privilege to be part of that team and I can't wait to see what happens next.


DAW BOOKS
These folks decided to take a chance on me. An idea that is in turns amazing and terrifying. I'm still having trouble wrapping my brain around it. Two books, CITY OF THE LOST and DEAD THINGS. I'm really trying to not fuck it up. 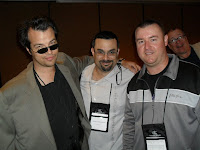 T THE AUTHOR: Stephen Blackmoore is a writer of pulp, crime and urban fantasy who occasionally lapses into talking about himself in the third person. His first novel, CITY OF THE LOST, a dark urban fantasy will be coming out from DAW Books in early 2012. His short stories and poetry have appeared in Plots With Guns, Spinetingler, Thrilling Detective, Shots, Demolition, Clean Sheets and Flashing In The Gutters. He has also written essays on Los Angeles politics and crime for the website L.A. VOICE.