1. The Walking Dead by Robert Kirkman – Everything is criminal about this book. How people deal with messed up situations created by other people. Not the zombies.

2. Criminal by Ed Brubaker and Sean Phillips – Few comics if any others at all hit this kind of quality. Writing, art, extras.

3. Green Lantern by Geoff Johns - Space cop written by one of the best comic writers out there. If you prefer more of a police procedural in space make sure to check out Green Lantern Corps.

4. Daredevil by Brian Michael Bendis – A classic run through upwards ten volumes of crime fighting noir with superheroes thrown in.

5. NOIR by Dark Horse Comics – Anthology of crime stories from a wide range of people.

6. Kick-Ass by Mark Millar – You’ve seen the movie. No read the source material that is less comic booky and much more bloodier.

9. Punisher MAX: Welcome to the Bayou by Victor Gischler – Why hasn’t HBO picked this up for a series? The Punisher and a whole lot of Southern charm.

10. Y The Last Man – One male is left on the planet. Well one male and his monkey. Also a male. And he has to survive. Decapitations and worse qualify Y for the list. It’s a ten trade series and I’m up to 9 so don’t ruin the ending for me. 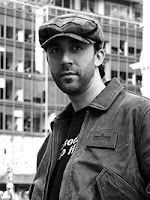 UT THE AUTHOR: From the halls of Marvel Comics as a mutant editorial intern to the heights of the Flatiron designing book covers and straight on through newsrooms as an art director, Anthony Schiavino has seen action and then some. Pounding away at the keyboard, working well into the night, he mixes his love of old hard-boiled stories, hopeless romance and black and white movie dialogue like a good stiff drink.