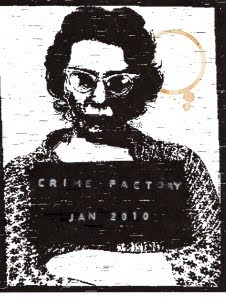 I think the best way to describe the year of 2010 for short fiction is flux.

The flux of new publications such as my dear sweet Crimefactory, Needle Magazine, Title Fights, Pulp Metal Magazine, and the exceptional All Due Respect (If you haven’t checked it out yet, it’s a sleeper of a zine, only publishing one story per month, but the stories are top of the line.) I’m sure I’ve forgetting one or two or a dozen, but you can check out Sandra Seamans essential blog, My Little Corner, for updates of new publications coming down the pipe.

The flux of stalwart publications such as Pulp Pusher, Thuglit, and Thrilling Detective sadly coming to a close.

The flux of new short story writers such as Chris Benton, Matthew C. Funk, Graham Bowlin, Chris Deal, Matthew McBride, A.J. Hayes, Nigel Bird, and Ian Ayris making waves (If I’m forgetting anybody you’ll have to forgive me, there are a lot of you mothers out there)

But with all this new stuff coming out—and great new crime fiction coming from tried and true publications such as Plots with Guns, Beat to a Pulp, A Twist of Noir, Thrillers, Killers, ‘n’ Chillers, Flash Fiction Offensive, Spinetingler, Crimespree, and Out of the Gutter—how do you narrow it down to a handful of short stories?

Well, what I’m going to do is fling a great big bunch of links out there of the stuff I dug and let you roll with it. (By the way, folks, I’m not a machine—as popular myth indicates—and I’ll be the first to admit that I don’t read every story that comes out. It’s impossible, so if you have your favorites, leave links to ‘em in the comments section of this post)

Before I start this thing, I should mention that I think the best stories of this year have all come out of Crimefactory.

I’m not just tooting our own horn here, but seriously, have you read the Suitcase by Dave White, or How to Jail by Dennis Tafoya, or Thin Mints by Dan O’Shea, or the Old Man by Jonathan Woods, or Five Ways Your Mom was Worse Than You’ll Ever Be by Sophie Littlefield, or Straight Razor by Scott Wolven, or the Darkest of the Debbies by Garnett Elliot, or Sparrows & Crows by John Weagly, or My Brother, the Asshole by Eric Beetner (forthcoming, but originally it won Jason Duke’s red hot writing competition in 2010)….

My favorite Kieran Shea story. Yeah, Irish has pushed a lot of ‘em out into the world, but this one.... vicious, compulsively readable, and one I was lucky enough to read as an early draft.

9) Blood and Bone in Bambooland by Cameron Ashley, Plots with Guns #9

I’m not being nepotistic with this one, Ashley is a fucking artist. I’m not kidding. Yeah, it’s a story about turning a corpse into fertilizer (literally), but damn, Ashley’s ear for dialogue and the natural rhythm of speech is stunning. Great read no matter how you slice it

When Christopher Grant wrote me asking what I thought of the 600-to-700 challenge (at the time it was going to be the 500-to-600 challenge) and if I was willing to participate, I’ll be the first to admit I didn’t know how well the experiment would pan out? Getting 2 or 3 writers to be on the same page about anything is a huge pain in the ass, but getting 75 or 80 of them to agree to do something and then getting them all to do it, well, that seemed just about impossible to me. But it’s worked, ATON is half way through (or pretty damn close) and there’s been some pretty strong work coming out of it. If you haven’t checked it out yet, make sure to right HERE.

Yeah, I know it’s a book line, but what Danny Bowman and his crew are turning out are Novellas and they’ve been pretty fun reads. Highlights have been Alan Kelly’s Let Me Die a Woman and Danny Hogan’s brutal revenge tale The Windowlicker Maker. I can’t wait to see what 2011 brings for this excellent independent press.

6) The Great Whydini by David Cranmer, All Due Respect #2

Cranmer is a perfectionist, each word carefully measured and examined and re-examined. To be honest with you, Cranmer is the kind of writer who makes a pulp writing hack like myself a tad bit jealous, because just about every story he puts out into the world can easily make it onto any ‘best of’ list. Great Femme fatale tale, and pure pulp at its finest.

What can I say, I dig civic minded morticians.

4) King by Dave Zeltserman, Beat to a Pulp

Not crime, kind of horror, but really more of a societal examination of what we consider normal behavior and what constitutes happiness. It’s your typical Zeltserman feel good kind of story

I hate hitman stories. Seriously, the whole convention has had its dick beaten into the dirt. But a hitman going through a mid-life crisis and absolutely hating his chosen career path, this one resonated and left me nodding my head in sympathy.

2) Ghostman on Third by Chad Eagleton, the Drowning Machine

There’s something to be said about quiet stories. The slow burn, the anticipation. This one took third in the Drowning Machine’s second annual Watery Grave Competition, but in my opinion, it should have taken 1st. I know, I know, Beat on the Brat by Nigel Bird was all kinds of awesome, but this one was so well measured, the dialogue so spot on. Plus, Eagleton’s another one of them ‘perfectionist’ writers. Bastard.

1) The Little Boy Inside by Glenn Gray, Beat to a Pulp and For the Children by Stephen Blackmoore, Needle #2 (tie)

I know, having a tie is a fucking cop out, but deal with it.

Dr. Gray is a freakin’ weird-o, but he’s my kind of weird-o. No, this isn’t crime, it’s just a straight up bizarro tale of a guy throwing up a little boy. Literally throwing him up. Give it a go if you haven’t already.

And with Blackmoore, damn. A teenage girl dead from a seemingly random shooting and all her friends and classmates gather around her snapping pictures and taking videos of her death throes sent chills down my spine. The rest of the story—narrated by a journalist, which for me is another one of those crime fiction conventions that can go the way of hitmen as far as I’m concerned, but it works for this one—is a brilliant investigation into the girl’s death. I liked this one so much that I politely suggested to Weddle that he needed to submit it to some of the ‘best of’ anthologies out there. Great read.