The Best of Whatever---Benjamin Whitmer

First, I should apologize for how abysmally ignorant I am when it comes crime fiction. All I can say is that thanks to Keith Rawson, Brian Lindenmuth and Jedidiah Ayres, amongst others, I’m learning a little something, so next year’s list is gonna be a hell of a lot better. I’m keeping a notebook of all the book recommendations I’ve gotten, and I’m working through it slowly. Eric Beetner, Craig Clevenger, James Sallis, Jonathon Woods, Megan Abbott, Hilary Davidson, Anthony N. Smith, Daniel Woodrell -- I’m so damned behind I get embarrassed to go out in public. And that’s not even counting the new stuff I’ve yet to read by authors I follow, like Stephen Graham Jones and Gary Phillips.

But, anyway, I know folks have been including other stuff besides books in their lists, but the fact is, excepting my family and friends, I don’t really give a shit about anything else. Gun parts, maybe, but I’m betting an ode to my 1911’s new Cylinder & Slide 4.5 pound trigger pull set wouldn’t enthuse much of anybody besides myself.

So, books, in no particular order (and, yeah, I’m sorry, there are eleven of them -- I couldn’t figure out the one to bump):

Blood’s a Rover by James Ellroy. I’ve liked Ellroy for years, but I thought this one was the big one, his great white whale. It may not the most nuanced depiction of government repression, but it’s sure as hell among the most compelling, and the conspiracy-fueled paranoia puts it among the likes of Hunter S. Thompson and William S. Burroughs.

The Savage Detectives by Roberto Bolano. This book killed me. A movement of young poets, The Visceral Realists, hitting hard against the established literature of their day, and what it cost them. The beauty of refusing to compromise, and the breakdown afterward.

The Chieu Hoi Saloon by Michael Harris. Stephen Graham Jones talked recently in an interview about how some writers write to live, write like each book has got to be the one that can save their life. Like Jones, those are the only books I care about, and this is one of them.

A Glass of Water by Jimmy Santiago Baca. I’ve been a fan of Baca’s poetry for years, and this, his first novel, sure as hell didn’t disappoint. Beautiful and brutal.

Twilight by William Gay. My first William Gay, and now I’m stocking up on everything he’s ever written. Jesus, what a book.

A Better Angel by Chris Adrian. There were moments reading this collection of short stories when I wanted to crawl out of my own skin. And now that I know what he knows about us, about human nature and all that shit, I probably should have.

Poachers by Tom Franklin. I came up with the short story “Poachers” by luck of the draw for a Spinetingler Magazine review, and went after the whole collection by way of context. Not knowing that it would leave me crawling around the floor looking for the other half of my brain.

Lethal Injection by Jim Nisbet. A subtle reflection on death in not-so-subtle -- in all the right ways -- garb. Hardcore, politically-charged, experimental crime fiction, yeah, I’d like a lot more of that.

The Chandler Apartments by Owen Hill. A bisexual, Berkeley, book-buying, poet detective on a murder case. It’s just as funny and violent as you’d hope it would be. A wonderful book.

Late Rain, by Lynn Kostoff. This one snuck up on me. It’s impeccably plotted and paced, sure, but just when you think you’ve got it figured out, all the lights come on in one brilliant passage that makes you have to go back and reread the whole damn thing. Which is, of course, even better than the first time around.

The Street of Crocodiles by Bruno Schultz. Strange, poetic, dreamlike, “a fabric of nightmares and hashish,” with one of the greatest and most scathing allegories for American commercialism ever put to paper. Not for everyone. Not always for me. But, yeah, amazing.

And now, not to get all weepy, but the one thing I’d put at the top of my list that ain’t fiction is finding this crime fiction community. Being introduced to the great crowd of slouching misfits and killers at Crimefactory, Spinetingler, Temporary Knucksline, Do Some Damage, Crimespree Magazine, The Pulp Primer, Hardboiled Wonderland, and all the other websites, focal points, autonomous zones, and internet dives that I’ve been trolling lately, has been a fucking revelation to me.

So, an end-of-year wish for all of you, from my very favorite crime -- or, at least, adventure -- writer:

“Gulp down your tears and hie aloft to the royal-mast with your hearts; for your friends who have gone before are clearing out the seven-storied heavens, and making refugees of long-pampered Gabriel, Michael, and Raphael, against your coming. Here ye strike but splintered hearts together-- there, ye shall strike unsplinterable glasses!” 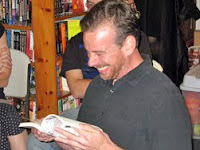 T THE AUTHOR: Benjamin Whitmer was born in 1972 and raised on back-to-the-land communes and counterculture enclaves ranging from Southern Ohio to Upstate New York. One of his earliest and happiest memories is of standing by the side of a country road with his mother, hitchhiking to parts unknown. Since then, he’s been a factory grunt, a vacuum salesman, a convalescent, a high-school dropout, a semi-truck loader, an activist, a kitchen-table gunsmith, a squatter, a college professor, a dishwasher, a technical writer, and a petty thief.

He’s published fiction and non-fiction in a number of magazines, anthologies, and essay collections. His debut novel is Pike, published by Switchblade (PM Press) He Blogs at Kick Him, Honey