Rawson’s Best of Whatever #6: Wake Up Dead by Roger Smith 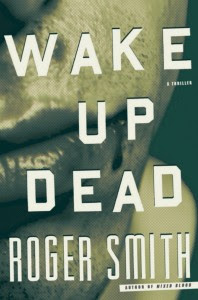 What set 2010 apart for me book wise was the stellar wave of sophomore novels which made it onto bookstore shelves. Dennis Tafoya's The Wolves of Fairmount Park (more on that one later) Stuart Nevile's heartbreaking Collusion and Roger Smith's Wake Up Dead. None of these author's suffered from the so-called "sophomore slump". In fact, their second novels were far more satisfying, complex pieces of writing. This, in particular, can be said about Smith's Wake Up Dead. Below is my original review of Wake Up Dead from Spinetingler Magazine, I hope you enjoy.

Review—Wake Up Dead by Roger Smith

Imagine the worst ghetto you’ve ever been in.

Imagine the poverty, strife, and outward hostility you experienced while you were there stranded in your broken down car, or because you got off on the wrong subway stop.

Now, what I want you to do is multiply that by a hundred.

No, screw a hundred, make it a thousand.

If you can even remotely picture this, you might have an idea about the world in which Roger Smith’s Cape Town, in his stellar sophomore novel, Wake Up Dead, exists.

Wake Up Dead is the Story of Roxy Palmer, an on the wrong side of thirty ex-runway model who has tumbled into the arms of one rich man after another until she lands in the gruff, alcoholic embrace of her husband, Joe. Joe is an arms dealer and freelance private security broker. After a charming evening dining with a central African cannibal/terrorist and his Russian whore, the couple is carjacked in the driveway of their home. Joe suffers a minor gunshot wound to the leg. However, as the thieves speed away in Joe’s former luxury automobile, his loving wife recovers the weapon Joe was shot with and decides to put an end to their lackluster five year marriage by blowing his brains out with plans of blaming it on the carjackers.

Billy is a native of the ruthless slums of Cape Town, a former gangbanger and cop who worked for Joe’s private security firm. Billy returns to Cape Town after being injured—and subsequently fired—from a protection job in Bagdad. Billy dreads coming home because of the violent ghosts—including suffering a brutal attack where he was burned over 50% of his body and then buried alive and witnessing the murder of his mentor and partner by the same malicious animal, Piper—which haunt its streets. But Joe owes Billy money, thirty thousand dollars to be exact, for his nearly flawless service.

Roxy and Billy’s paths inevitably intertwine once the carjackers return to the scene of the crime after one of the speed freaks—Disco, who also happens to be the former “wife” of Billy Africa’s nemesis, Piper in Pollsmoor maximum-security prison—is brought in for a lineup and they get it into their tck-tck (South African slang for crystal Methane) addled skulls to blackmail the unrepentant widow with their knowledge that she was the one who murdered Joe.

Billy comes onto the scene after the two junkies kidnap Roxy off the street and bring her back to her and Joe’s home to terrorize her and steal whatever isn’t nailed down. Billy, of course, is looking for his money and after untying Roxy, quickly comes to the realization that Roxy killed Joe due to her reluctance to call in the police about the home invasion and in turn decides that it’s in his best interests to more or less blackmail Roxy in order to recover his earnings, but he also decides to act as her bodyguard in order to insure that he gets his money.

To further muddy the waters, the vicious Piper, has become obsessed with his former “wife” Disco and wants the pretty boy back at any cost, including breaking out of prison and leaving behind a long line of corpses in order to get him back inside of Pollsmoor at Piper’s side to spend the rest of their lives together.

As you can guess there’s a lot going on in Wake Up Dead (and a lot more that I’ve failed to mention.) and in lesser hands, this book might have been a hazy, lackluster mess of a novel. However, with his second effort, Smith has proven what a natural born storyteller he is. Smith takes the multiple strands of his broken, tragic characters and weaves them into a complex, cinematic tapestry, which keeps you turning pages at a machine gun fire pace. Smith’s prose is simple and straightforward. His sentences are clipped and unadorned, but yet have unique, poetic quality.

And yes, much has been said about the violence of Wake Up Dead, (and of his equally impressive debut, Mixed Blood.) and no question about it, the novel is a virtual bloodbath, but you never feel that it’s too gratuitous or simply inserted to shock the audience. I felt each dramatic episode was absolutely necessary in moving the plot towards its brutal, emotionally exhausting climax.

Wake Up Dead is an intense, visceral experience and the type of novel where you’ll almost want to immediately turn back to page one and experience the harder than nails ride all over again. And I for one whole heartedly believe that if Smith continues to write with this level of self assuredness and quality, that his work may very well stand as equal to such hard-boiled masters as Bruen and Ellroy.