Rawson's list of Whatever--#9: the Deputy by Victor Gischler 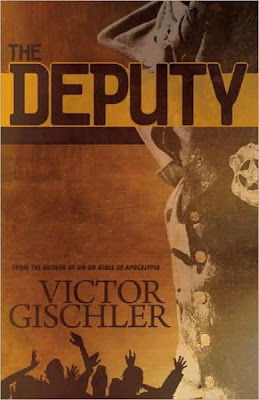 If there was a Victor Gischler fan club, chances are I would be the president of it. Gischler has yet to disappoint me with any of his novels. His sharply drawn characters, sense of pacing, raucous humor, and explosive, cinematic action scenes in my mind place him on the same level as the great Joe R. Lansdale.

Victor Gischler is one of those novelists whose books I devour.

I preorder them; I drool over them in anticipation of their arrival and when I finally get my greedy little hands on the pulpy goodness contained within, I read them in one sitting

So sue me, I dig the Louisiana based novelist and I have every reason to. The man writes some of the best action scenes in crime fiction and his characters all tend to be smarmy, wise cracking—albeit believable—likeable lowlifes.

Gischler’s newest, The Deputy— his first with the good folks at Tyrus Publishing —has all of the same elements as his last four crime novels and he manages to amp it up a notch with this lean backwoods thriller.

The Deputy is the story of Toby Sawyer. Toby’s a nice kid from a go no where, wind blasted western Oklahoma town. Toby is an aspiring musician who has escaped the smothering confines of his hometown, but is sucked back in after the death of his mother. While there to settle up her meager affairs, Toby knocks up a local girl during a night of partying with high school friends and before he knows it, he’s a husband and father and working as a part time deputy for the sheriff’s office in a vain attempt to squeak out a living for his young family. One night, Toby is called away from his family to baby sit a corpse until the local coroner can come and recover it.

While performing this slack jawed detail, Toby becomes bored and decides to visit his underage girlfriend. Upon his return, he discovers that the body has gone missing and thus begins his long night of violence, buckets of blood, betrayal, and corruption.

First off, if you’ve never read Gischler before, this should be the novel you start with. Gischler’s abilities are on full display with The Deputy. There’s very little build up before the author drops Sawyer into a shit storm and the dramatic action scenes are full bore and over the top. Sawyer is a very likable protagonist and if Gischler was to create a series character, the Deputy of the title wouldn’t be a horrible choice.

For those of you who have read Gischler’s previous novels, the best comparison I can offer is that The Deputy captures the same tone and energy as the near classic Shotgun Opera with out the narrative bulk to weigh it down. And, yes, length is the Deputy’s strongest attribute. Gischler keeps the novel pared down and mean as hell. With the novel clocking in it at a sparse 250 pages, Gishcler never wastes a word and mirrors the classic pulp fiction of the 50’s and 60’s.

When I first read The Deputy last summer, I was fully prepared to include this fierce novel in my top five reads of the year and upon my second reading, I’m still prepared to do the same.